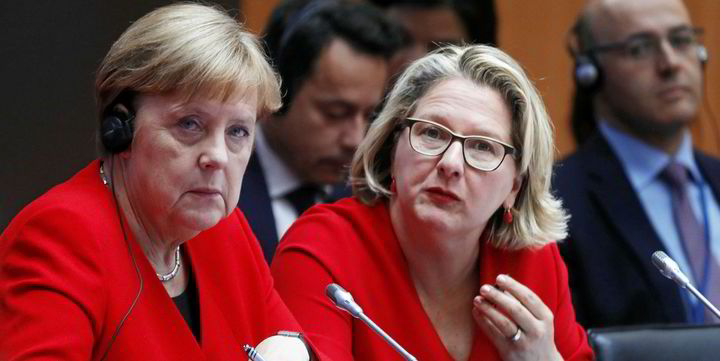 Just in time for the COP25 climate conference that started in Madrid on Monday, Germany’s climate policy is in disarray – as is Chancellor Angela Merkel’s left-right governing coalition.

Members of the Social Democrats (SPD), the minor partner ruling Germany with Merkel’s conservatives (CDU/CSU), in a party referendum voted for a duo of two sceptics over the so-called ‘grand coalition’ as its new party leaders.

The outcome was unexpected, as the winners – Esken Walter-Borjans, a former state minister in North-Rhine Westphalia, and Saskia Esken, a little-known member of parliament – beat a rival partnership of powerful finance minister and vice chancellor Olaf Scholz, and his running mate Clara Geywitz.

The new dual party leadership during the race for the SPD top spots had indicated it will recommend an end to the coalition with the CDU/CSU, if Merkel’s Christian Democrats won’t re-negotiate a series of policies, among them the recently approved climate package that is considered too unambitious by great parts of the SPD.

The SPD at its party convention that started on Friday still needs to formally approve Walter-Borjans and Esken as new leaders. Meanwhile, several heavyweights in the CDU have already rejected their calls for a renegotiation of the coalition deal.

If the new SPD leaderships gets its way, the renewables sector may profit if a faster route to a decarbonisation of Europe’s largest economy is the outcome.

But if the CDU/CSU doesn’t budge, Walter-Borjans and Esken may wreck Merkel’s coalition, with the result likely being a Merkel minority government for a short while followed by fresh elections early next year.

It is unclear how both parties will act next in the standoff as both the CDU/CSU and the SPD are likely to shed votes in the case of a new election, although the SPD has more to lose.

That means the only stable government coalition after new elections would be between the conservatives of the CDU/CSU and the Greens.

The crux (at least for the CDU/CSU) is that the Greens are even less likely than the SPD to accept the lacklustre climate package that foresees an exit from coal only in 2038, and a carbon price for heating and fuels that would start at an unimpressive €10 per ton of CO2.

The Greens have already demanded an early coal exit in 2030, an initial CO2 price of at least €40/MWh, and a scrapping of a planned 1km minimum distance rule for new wind projects.

While Merkel herself has admitted that she could imagine a more ambitious climate policy, she has resigned to “what is possible” during the climate-package debate as heavyweights in her party put on the brakes. Among them was the powerful state premier of North-Rhine Westphalia, Armin Laschet, who is also seen as vying for the chancellorship.

Merkel’s favourite in the race to succeed her, CDU party leader Anngret Kramp-Karrenbauer, is herself a party conservative with moderate climate ambitions. AKK, as she is widely called, also currently is too weak within her party to push through demands against the more right-wing sceptics of wind power on land, who also reject a faster coal exit.

Merkel herself has said she won’t run again in case of new elections, which leaves politicians such as Laschet with more power.

On the other hand, without the Greens the CDU/CSU would have no possible majority after fresh elections as the SPD has worn itself out in the coalition, and the liberal Free Democrats (FDP) will likely come out too weak. At the same time, all parties have ruled out a coalition with the far-right Alternative for Germany (AfD) that may become third-strongest party, overtaking the SPD.

Either way, the CDU/CSU may need to budge on climate issues, or risk a constitutional crisis.

At the Madrid summit, environment minister Svenja Schulze of the SPD has the unpleasant task of defending Germany’s feeble climate package that much of her party rejects, helped by another round of Fridays for Future teenage climate protests that brought some 50,000 people to the streets of Berlin last Friday.

At no extra cost to you, we could make a small commission if you make a purchase from links on this website through our affiliate programs.

Enter your email address to subscribe to TheSolarMove Newsletter and receive notifications of new posts by email. Thank you for Suporting TheSolarMove. We never sell your information and you can Un-subscribe at anytime.
Follow us on Twitter for updates, news, and questions on Solar.

We appreciate you supporting The Solar Move. By buying through one of Products links or Amazon link TheSolarMove can make a commission (at no additional cost to the buyer).

Stay up-to-date on Solar News; our blog updates daily with News of Solar, Wind, and Renewables.